To celebrate Nelson Mandela’s 93rd birthday Monday, the former South African president is asking people around the world to donate their time to public service. At least 67 minutes’ worth. 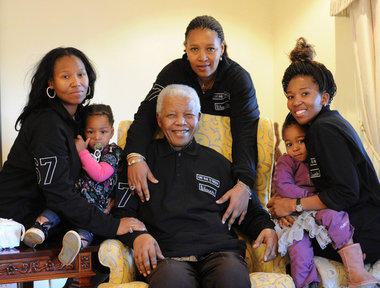 CNN reports a group of multiracial, multilingual motorcycle riders known as “Bikers for Mandela Day” have been riding throughout South Africa the past week. In one of their seven community service projects, the bikers stopped in the small town of Harrismith to paint a children’s orphanage.

“For Madiba (Mandela), it demonstrates to him that people are passionate about his legacy,” Mandela’s personal assistant Zelda la Grange said.

Though South Africa doesn’t officially recognize the holiday, the United Nations has been supporting Nelson Mandela International Day on July 18 since 2009. According to CBS, people throughout the world are encouraged to spend at least 67 minutes of their time helping others in recognition of Mandela’s 67 years of public service. 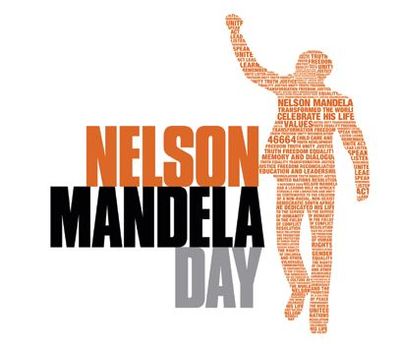 Here are 67 ways Mandela’s website suggests people can “change the world”:
1. Make a new friend. Get to know someone from a different cultural background.
2. Read to someone who can’t at a local home for the blind.
3. Fix the potholes in your street or neighborhood.
4. Help out at the local animal shelter. Dogs without homes still need a walk and a bit of love.
5. Find out from your local library if it has a story hour and offer to read during it.
6. Offer to take an elderly neighbor who can’t drive to do their shopping/chores.
7. Organize a litter cleanup day in your area.
8. Get a group of people to each knit a square and make a blanket for someone in need.
9. Volunteer at your police station or local faith-based organization.
10. Donate your skills!
11. If you’re a builder, help build or improve someone’s home.
12. Help someone to get his/her business off the ground.
13. Build a website for someone who needs one, or for a cause you think needs the support.
14. Help someone get a job.
15. If you’re a lawyer, do some pro bono work for a worthwhile cause or person.
16. Write to your area councilor about a problem in the area that requires attention.
17. Sponsor a group of learners to go to the theatre/zoo.
18. Get in touch with your local HIV organizations and find out how you can help.
19. Help out at your local hospice, as staff members often need as much support as the patients.
20. Take time to visit terminally ill people and bring some sunshine into their lives.
21. Talk to your friends and family about HIV.
22. Get tested for HIV and encourage your partner to do so too.
23. Take a bag full of toys to a local hospital that has a children’s ward.
24. Take younger members of your family for a walk in the park.
25. Donate some medical supplies to a local community clinic.
26. Take someone you know, who can’t afford it, to get their eyes tested or their teeth checked.
27. Bake something for a support group of your choice.
28. Start a community garden to encourage healthy eating in your community.
29. Donate a wheelchair or guide dog, to someone in need.
30. Create a food parcel and give it to someone in need.
31. Offer to help out at your local school.
32. Mentor a student in your field of expertise.
33. Coach extramural activities at the school.
34. Offer to provide tutoring in a school subject you are good at.
35. Donate your old computer.
36. Help maintain the sports fields.
37. Fix up a classroom by replacing broken windows, doors and light bulbs.
38. Donate a bag of art supplies.
39. Teach an adult literacy class.
40. Paint classrooms and school buildings.
41. Donate your old textbooks, or any other good books, to a school library.
42. Give blankets you no longer need to someone in need.
43. Donate clothes you no longer wear to someone who needs them.
44. Put together food parcels for a needy family.
45. Organize a bake sale, car wash or garage sale for charity and donate the proceeds.
46. Donate shoes you don’t wear.
47. Volunteer at your local soup kitchen.
48. Help at a local children’s home or orphanage.
49. Help the kids with their studies.
50. Organize a friendly game of soccer, or sponsor the kids to watch a game at the local stadium.
51. Coach a sports team and make new friends.
52. Donate sporting equipment to a children’s shelter.
53. Donate educational toys and books to a children’s home.
54. Paint or repair an orphanage or youth center.
55. Mentor someone.
56. If you play an instrument, visit your local old-age home and spend an hour playing for the residents and staff.
57. Learn the story of someone older than you.
58. Take an elderly person grocery shopping; they will appreciate your company and assistance.
59. Take someone’s dog for a walk if they are too frail to do so themselves.
60. Mow someone’s lawn and help them to fix things around their house.
61. If there are no recycling centers in your area, petition to provide one.
62. Donate indigenous trees to beautify neighborhoods in poorer areas.
63. Collect old newspapers from a school/community center/hospital and take them to a recycling center.
64. Identify open manhole covers or drains in your area and report them to the local authorities.
65. Organize groups that you work with to switch off all unnecessary lights and power supplies at night and on weekends.
66. Engage with people who litter and see if you can convince them of the value of clean surroundings.
67. Organize to clean up your local park, river, beach, street, town square or sports grounds.

Mandela, who was imprisoned for 27 years for his efforts to end South Africa’s apartheid regime, was freed in 1990 and awarded the Nobel Peace Prize in 1993.

Coke may be the official sponsor of the FIFA World Cup in South Africa, but Pepsi’s 2.5-minute “Oh Africa” is the first World Cup ad to make the viral chart, and portends well for Pepsi’s revamped social-media strategy.

Pepsi took a pass on the Super Bowl for the first time in 23 years in 2010, and CEO Indra Nooyi has said the company is shifting as much as a third of its marketing budget to social media. But “social” doesn’t necessarily mean “cheap.” Pepsi’s video effort is big-budget with visual effects and stars the biggest names in the game, including Lionel Messi, Thierry Henry, Frank Lampard and Didier Drogba.

ESPN is featuring mobile as a central channel in its efforts to connect with soccer fans leading up to and during the 2010 FIFA World Cup in South Africa. 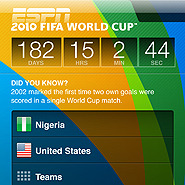 As part of the ramp up in soccer coverage, ESPN Mobile has launched a free ESPN World Cup application for the iPhone and iPod touch available in the App Store. The application features live draw results updated in real-time and includes breaking news and analysis of the World Cup, which will take place in June.

“This app is the start of a much bigger campaign we’re going to have on mobile related to the World Cup,” said Oke Okaro, New York-based vice president of mobile at ESPN. “The app itself was launched to coincide with the draw, which represented the start of the World Cup campaign for us.

“The World Cup is a very big priority for ESPN, and we see mobile as being a very big component of that coverage,” he said. “Generally speaking, games will be played during hours when people are not sitting in front of a TV, so mobile is a way for people to connect to the teams they care about most wherever they may be.”

It’s an audacious premise…A rudderless mother-ship drifts to a halt above the city of Johannesburg 20 years ago, 10-foot-tall extraterrestrials with wormy-looking nose tendrils, exposed stomach organs and kangaroo-like legs have eked out an existence in a government-sanctioned “District 9” enclave.

A weapons conglomerate Multi-National United is hired to export the aliens, who are reviled by the city’s human population, to a new encampment 200 miles away in the middle of nowhere. Apartheid all over again and how ironic the location is Johannesburg.

Unlike most glossy sci-fi fantasies, there’s not a single shot of the galaxies in District 9, and the filmmaker makes only minimal use of the gleaming high-tech accoutrements that typically sell the idea of superior intelligence from outer space. Instead, these aliens wear raggedy secondhand clothes, forage for cat food and act like any other sentient creature forced to live in barbed-wire ghettos — they’re tough, resourceful and cranky.

Shooting the action scenes in an actual Soweto slum, Blomkamp underscores his politically charged message about xenophobia, racism and apartheid: The aliens’ spaceship, mechanical exo-suits and enormous hovercraft may be pure science fiction, but the District 9 battleground is regrettably grounded in the kind of hard-nosed politics and corporate avarice seen routinely on the nightly news.

Blomkamp and co-writer Terri Tatchell embed their alien vérité story with a central conflict: The extraterrestrials possess mind-boggling weaponry that would make a fortune for Multi-National United. The complication: Only operators with alien DNA can use the technology.

Meanwhile, aliens have concocted a fluid that could fuel a return to their faraway home. A reckless search of an alien lab leads to a variety of brutal medical experiments that evoke Abu Ghraib by way of David Cronenberg.

District 9 ultimately achieves liftoff on the strength of the unsettling metaphor threaded throughout the reality-based spectacle. To paraphrase Pogo: “We have met the aliens, and they are us.” 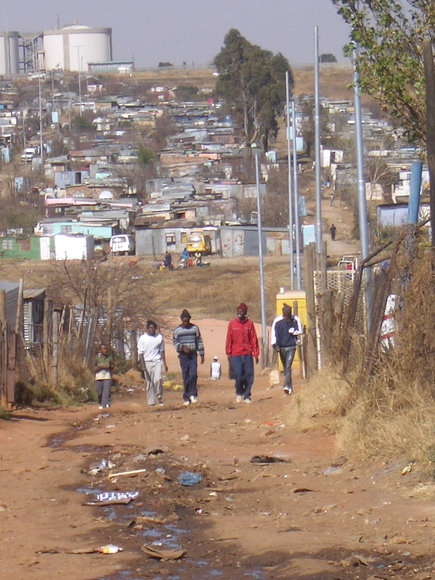 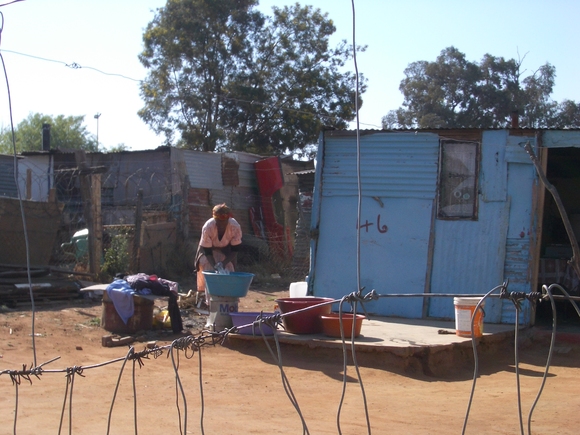 Go see this, it is definitely interesting.

On Mandela Day I thought I should repost this photo album.
There is still so much poverty…the most shocking thing was huge power lines overhead Soweto but NO power and no water even though there are water sources and pipes next to the village! What is going on?