In “Eagle Eye,” the Dreamworks/Paramount Pictures thriller set for release this weekend, the lead characters are driven to extreme acts by a mysterious woman who contacts them via their mobile phones. 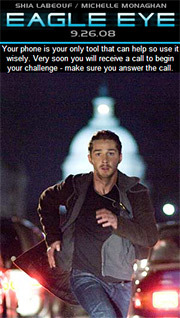 So what better way to promote the movie than through a mobile-marketing campaign?

The effort, created by Millennial Media for Paramount, follows the movie’s plot, without giving too much away, and drives consumers to opt in for voice, text and mobile-web messages similar to what “Eagle Eye” protagonists Jerry Shaw (Shia LaBeouf) and Rachel Holloman (Michelle Monaghan) experience.

Eric Eller, senior VP-marketing at Millennial, said his definition of a great mobile campaign is one that creates compelling content that is easy to share with others and links to the consumer mobile experience. Thanks to the content of the movie, the last parameter was a given.

“In this case it was easier than usual, and it’s even more interesting because we could bring into play all the ways people use mobile phones — calling, text and mobile web,” he said.

All will be revealed…The first message the user receives is a call, voiced by the same mysterious woman in the movie, warning that “you’ve been activated” and that the line is no longer secure. Other warnings and hints come via text messages, interactive voice response and SMS. The upshot of all this builds to hype the movie, when “all will be revealed on Sept. 26.” 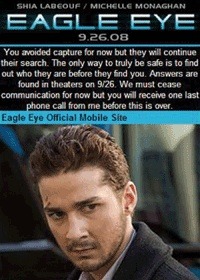 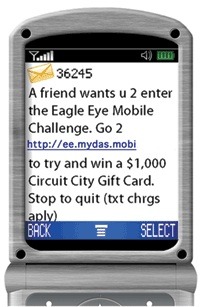 There was also a sweepstakes for a chance to win a $1,000 gift card from Circuit City for those who opt in.

Millennial placed mobile banner ads across its network at a wide variety of websites, including the homepages for Major League Baseball, CBS News, TV Guide and Weatherbug, to drive consumers to opt into the campaign. Consumers can join by inputting their phone numbers right into a box on the banner.

“This groundbreaking campaign is an excellent example of how advertisers can creatively use today’s mobile technologies to connect their content to consumers,” said Michael Rosenberg, manager of national advertising at Paramount, in a release. “We are delivering a highly distinctive theatrical marketing vehicle which brings the ‘Eagle Eye’ film experience to its consumers in a new and exciting way.”

This mobile campaign marked the seventh time Paramount tapped Millennial for theatrical or home-entertainment releases. It is also the latest in a series of aggressive marketing pushes for the anticipated blockbuster that includes not only outdoor, radio, print and TV, but also digital marketing, including well-received alternate-reality game “Eagle Eye Freefall.”