Having worked with Nestle on its Nescafe brand throughout the world I found this very interesting. I always believed Nestle should have created a Starbucks style cafe and add credibility to its coffee heritage for instant coffees. Now Starbucks has done it. 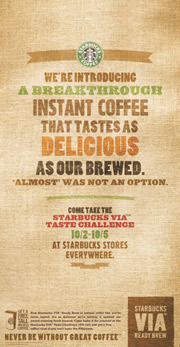 Starbucks launches its first major advertising and marketing campaign Tuesday for Via, the instant-coffee product it spent 20 years developing. The marketer is tapping traditional and social media, and asking consumers if they can tell the difference between the instant variety and the brewed coffee that made it a household name.

The chain is expecting between 8 million and 10 million consumers to visit its 7,500 company-run cafes in the U.S. and Canada to participate in a taste test that runs Friday through Monday. Participants will receive a “thank you” card good for a free coffee on their next visit, and $1 off their purchase of Via at any Starbucks.

Part of the idea for the taste test, said Terry Davenport, Starbucks senior VP-marketing, came from the Chicago market, where Starbucks did its only advertised test of Via. While the TV ads led to a high level of awareness, consumers weren’t motivated to visit stores — so the brand created an event in hopes of spurring its faithful into action.

“Instead of selling something at them, we ask them to participate with us,” he said. In so doing, “we’re using the best weapon in our tool kit, one that on one else has, our store-level partners.” Starbucks is sending its 4 million Facebook friends invitations to participate, with the anticipation that they will invite their friends. “It has a multiplier effect,” Mr. Davenport said.

“I’ve been fooling people for almost a year now, at home, at the office. I make coffee for my wife almost every day,” Starbucks CEO Howard Schultz said in a call with reporters. “I tell people this is the instant version of Starbucks brewed coffee and they’re shocked.” 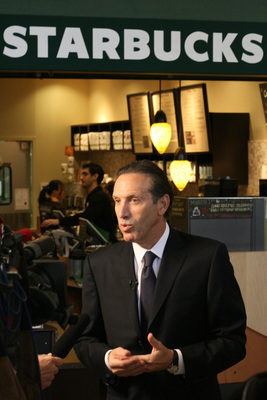 With this launch, Starbucks is expanding distribution of Via from test markets Chicago, Seattle and London to stores throughout the U.S. and Canada. In addition to its own cafes, Starbucks Via will now be sold in REI, Office Depot, Compass, United Airlines, Barnes & Noble cafes, and Marriott and Omni Hotels. Via will break in to mass grocery in 2010.

Mr. Schultz said that the chain is looking to create “additional usage occasions” for Starbucks coffee. The idea is that heavy coffee drinkers may have a cup of Starbucks on the way to work and a mug of swill once they get there.

Starbucks sees additional opportunities with travelers and campers. Mr. Schultz initially defined instant coffee as a $17 billion market, but has expanded that estimation to $21 billion, based on updated international sales figures. Instant coffee is much more popular outside the U.S., making up about 40% of worldwide consumption.

While such a retail strategy seems unorthodox, it has worked for companies such as Red Box video, which rents DVDs outside supermarkets. Cranium, the popular board-game, grew its business by scoring distribution at Starbucks stores. Red Bull catapulted to prominence in part by its popularity as a mixer with vodka.

“All of those outlets make total sense,” said Lynn Dornblaser, director-consumer-package-goods insight at Mintel International. “But that’s not what a major market position should be, because it’s only going to be a tiny, tiny percentage of consumers.”

Starbucks acknowledged that another reason for holding off on mass grocery is ensuring that Via will be merchandised with other Starbucks products, and away from Nescafe. The Nestle product has mounted offensives in Seattle and Chicago, describing Via as a product that costs 400% more, or about $1 a packet. 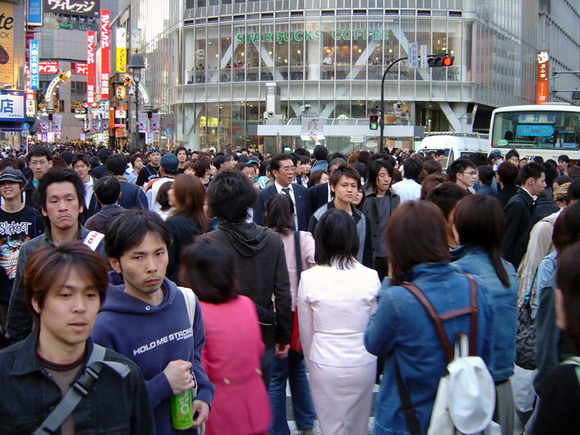 Sazaby in Japan and Starbucks, which began as a specialty coffee-bean purveyor in Seattle more than thirty years ago, gave Japan’s specialty coffee industry a real jolt when it established its first shop in Tokyo in late 1996.

In just several years, the company has achieved a cult-like status, revitalized an entire industry, generated local competition, and inspired a new coffee culture that has extended the coffee drinking demographic significantly.

Starbucks uses an energetic, hands-on style and straightforward corporate governance to manage its fast-paced growth, and has made employee satisfaction a key ingredient in its hugely successful blend. Other primary drivers of the “Starbucks experience” include offering customers high quality coffee, excellent customer service, a stream of innovative and appealing products, a savvy local partner with a similar business culture and values, and an inviting, nonsmoking environment.

By combining the parent company’s sophisticated supply chain for coffee bean sourcing with its local partner’s understanding of the Japanese market, Starbucks Coffee Japan has become the clear market leader, poised to open its 700th store this year.

Howard Schultz, the parent company’s chairman and chief global strategist, had long been interested in the Japanese market, but a meeting with a blue-chip Japanese consulting firm in the early 1990s proved very discouraging. Japanese consumers would not accept a nonsmoking environment or drink from paper cups in the street, said the consultants, adding that Starbucks would have to keep stores no larger than 500 square feet to save on rent.
Furthermore, the consultants believed that no Japanese person would walk down the street carrying a Starbucks beverage because it was considered impolite in Japanese culture.

Schultz and Starbucks did not adopt any of the recommendations the consultants made, choosing instead to offer a Starbucks experience similar to what had worked in the United States. They met with several potential Japanese partners, but it was at a meeting with Yuji Tsunoda, a senior board member of Sazaby, that Starbucks Coffee Japan was born.

Tsunoda had visited a Starbucks in 1992 and been impressed by the quality of the coffee and the excellent customer service. He identified immediately with the vision and values of Starbucks, and subsequently proposed forming a partnership, sensing that Starbucks could greatly increase Sazaby’s customer base. Meeting with Tsunoda convinced Schultz that Sazaby was the partner he had been searching for. The two companies had similar business cultures and a similar view of how to serve Japanese customers better.

Tsunoda, who is CEO of Starbucks Coffee Japan, said: “In a typical board meeting at Sazaby, even people who had questions didn’t bother to ask. Our Starbucks Coffee Japan meetings are much more dynamic, the U.S–based members tend to focus on what the company has done and make concrete suggestions for improvement. The Japanese members talk knowledgeably about the realities we are facing in the market and the long term.” (Tsunoda, 2005)

Tsunoda also notes that Sazaby learned a lot about disclosure practices from Starbucks because of U.S. (SEC) requirements and because Starbucks Coffee Japan had to make sure foreign board members received all materials beforehand so they could fully participate in discussions and decisions. “We shared a lot of information and ideas as questions would come from non-Starbucks Coffee Japan members,” he says. “This has made our meetings longer but significantly increased our effectiveness.”

Starbucks overall theme is to provide a third place outside of work and home where people can relax and enjoy top-quality coffee and coffee-related products. Starbucks Coffee Japan trains employees to thoroughly understand what Starbucks represents, and believes its employees represent the firm’s most valuable asset.

David Chichester, Starbucks Coffee Japan’s chief financial officer, says: “The culture is so important at Starbucks that all executives also go through an orientation during which they spend several days or more actually working at the store level to get the feel of the Starbucks experience and culture.”

Starbucks culture is actually very similar to the old Japanese traditional business mentality where members of the company are part of a family. Since Sazaby operates in the same fashion, the creation of the 50/50 joint venture went very smoothly. Starbucks provided the complete supply chain of top-quality coffee, from purchasing to roasting to packaging, a feat that would be very costly for any other company to reproduce or copy.

Sazaby, on the other hand, had insights into the Japanese consumer and the right connections and ability to pinpoint new store locations. Starbucks Coffee Japan successfully went public in October 2001 and now operates as a separate entity from Starbucks Coffee International.

Starbucks Coffee International has sent over staff to help explain operating techniques, policies, and procedures. The basic services and goods have not been altered, although counter heights and merchandise packaging were changed a little to suit Japanese consumers. Early on Starbucks Japan fell into the red in fiscal 2002, posting a net loss of ¥454 million primarily because of too rapid growth opening new shops faster than its cash flow could handle.

In less than a decade, Starbucks Coffee Japan has been able to basically reinvent the retail coffee market in Japan. The company did this by combining its own dynamic corporate style, brand name, global supply chain, and extensive expertise in producing quality coffee with partner Sazaby’s understanding of the Japanese consumer and insights into how to establish unique products and services. Despite a host of aggressive imitators and very tough economic environment, the company continues to grow the contemporary coffee house category. 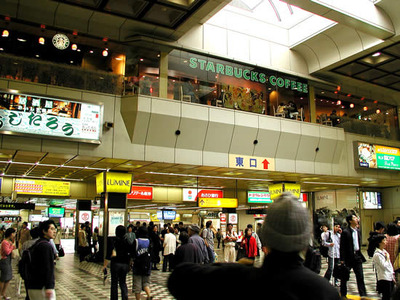