The Cupertino, California municipal website is attracting buzz this weekend with a slew of new material about Apple’s proposed new “spaceship”-inspired mega-campus for 12,000 employees. 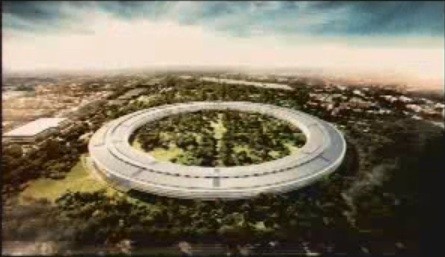 Apple CEO Steve Jobs made a surprise appearance at a Cupertino City Council meeting in June to announce plans for a major expansion of the company’s headquarters, on a parcel of land formerly owned by Hewlett-Packard. The city’s website now has posted material related to Apple’s submission of a development proposal for the new “Apple Campus 2” on a 175-acre area.

Included in the proposal were downloadable PDFs of floorplans and renderings of the proposed circular building, which is expected to be completed by 2015. Here is the link to the PDF’s.

“Apple is growing like a weed,” Jobs told the council in June. “It’s a little like a spaceship landing,” he said of the futuristic design.

After the presentation, Cupertino Mayor Gilbert Wong said, “Cupertino is ready for this. … There is no chance we are saying no.”