Tokyo was an incredible city back in the bubble years…some of the clubs and shows were incredible…this spot is like a night in Tokyo in the late 80″s early 90’s…Club Gold, Club Orange and One Eyed Jack when they had a casino. There was even a club with mermaids swimming behind the bar.

This spot looks like it was shot in the Russian restaurant in the basement called Volga. Lost in Translation was great at showing a side of the city that people think was over the top but having lived there I can tell you it was the real deal.

Tokyo is still a wild place but during the bubble it was surreal, 24/7.

Shot of Volga near Tokyo Tower 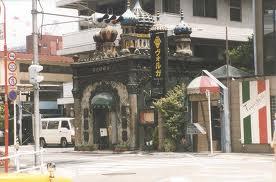