The economy is in tatters and, for millions of people, the future is uncertain. But for Hormel employees times have never been better. They are working at a furious pace and piling up all the overtime they want.

The workers make Spam, perhaps the emblematic hard-times food in the American pantry. 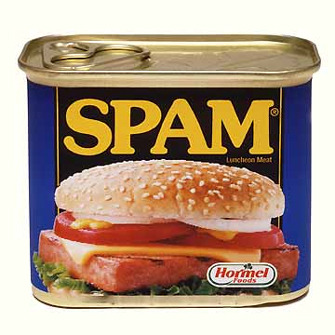 Through war and recession, Americans have turned to the glistening canned product from Hormel as a way to save money while still putting something that resembles meat on the table. Now, in a sign of the times, it is happening again, and Hormel is cranking out as much Spam as its workers can produce.

In a factory that abuts Interstate 90, two shifts of workers have been making Spam seven days a week since last July, and they have been told that the relentless work schedule will continue indefinitely.

Spam, a gelatinous 12-ounce rectangle of spiced ham and pork, may be among the world’s most maligned foods, dismissed as inedible by food elites and skewered by comedians who have offered smart-alecky theories on its name (one G-rated example: Something Posing As Meat).

But these days, consumers are rediscovering relatively cheap foods, Spam among them.

Hormel workers were interviewed recently with the help of their union, the United Food and Commercial Workers International Union Local 9. Slumped in chairs at the union hall after making 149,950 cans of Spam on the day shift, several workers said they been through boom times before — but nothing like this.

Even as consumers are cutting back on all sorts of goods, Spam is among a select group of thrifty grocery items that are selling steadily.

Pancake mixes and instant potatoes are booming. So are vitamins, fruit and vegetable preservatives and beer, according to data from last October compiled by Information Resources, a market research firm.

There has also been a double-digit increase in the sale of rice and beans. Heck the Brazilians have known about that great belly filler for decades.

Recently Kraft Foods reported that some of its value-oriented products like macaroni and cheese, Jell-O and Kool-Aid were experiencing robust growth. And sales are still growing, if not booming, for Velveeta, a Kraft product that bears the same passing resemblance to cheese as Spam bears to ham.

Spam holds a special place in America’s culinary history, both as a source of humor and of cheap protein during hard times.

Jay Hormel, the son of the company’s founder, invented Spam during the Great Depression. Spam is a combination of ham, pork, sugar, salt, water, potato starch and a “hint” of sodium nitrite “to help Spam keep its gorgeous pink color,” according to Hormel’s Web site for the product. 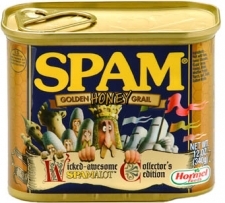 Because it is vacuum-sealed in a can and does not require refrigeration, Spam can last for years. Hormel says “it’s like meat with a pause button.”

During World War II, Spam became a staple for Allied troops overseas. They introduced it to local residents, and it remains popular in many parts of the world where the troops were stationed. 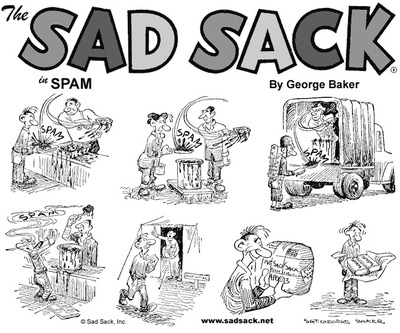 Guam, Okinawa and even Japan have a special affection for Spam. I had Spam Sashimi in Tokyo introduced by the Samoan Sumo Champion, Akibono.

Last night I saw Spam make an appearance on the Waffle House menu…yikes the economy will even change our dietary habits.