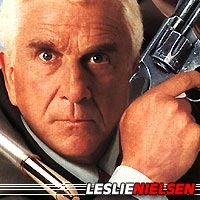 Despite decades spent playing sober commanders and serious captains, Leslie Nielsen insisted that he was always made for comedy. He proved it in his career’s second act.

“Surely you can’t be serious,” an airline passenger says to Nielsen in “Airplane!” the 1980 hit that turned the actor from dramatic leading man to comic star.

“I am serious,” Nielsen replies. “And don’t call me Shirley.”

The line was probably his most famous — and a perfect distillation of his career.