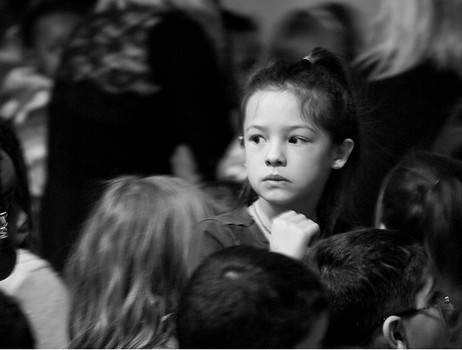 I read an article in the New York Daily News this week and thought some of the tips from two Aurora psychologists with expertise treating children were icertainly worth passing on to parents of young children.

With a comic book hero, a movie theater, and a helpless crowd of young people enmeshed in last week’s tragedy in Aurora, it’s no wonder that parents across the country have begun grappling with how to help young ones deal with the incident and its aftermath.

Dr. Jeffrey Dolgan, a senior psychologist at The Children’s Hospital of Denver – where six victims were taken in the wake of the shooting – said parents should really take three major steps when broaching the subject of this or any traumatic event with their children.

“First, parents have to compose themselves,” Dolgan said, stressing that parents should think carefully about what they want to say to their children before they begin what will likely be a difficult conversation.

Tough task, in my generation our parents never talked about these types of events but with the massive news coverage and kids that are more wired today even on the web those days are gone.

“Kids are all over the place with where they are developmentally,” he said. In order to deal with these differences, creating an atmosphere in which your children feel comfortable approaching you with questions would be optimal.

As a parent I would like to not discuss things like this but with today’s media coverage and so many other kids talking about it Aurora’s tragedy is impossible to sweep under the rug.

Dr. Richard Marafiote, another psychologist who has worked in Aurora for many years, stressed how important it is for parents to “tune in” to their children in moments like these.

“By and large I think about the importance of parents allowing their children to speak about how they feel rather than having those parents put on their children what they believe their child may think or feel,” he said.

Finally, Dolgan suggested parents should try to “normalize” the situation as much as possible, while limiting media exposure.

“What we’ve found with many studies is the more kids and parents see the same kind of visuals, the more traumatizing it is,” Dolgan said.

Both Dolgan and Marafiote said it is not out of the ordinary for children, even far from a tragedy’s epicenter, to display anxious behavior following a traumatic event. That has to be true, even I was a bit apprehensive going the the multi-plex for the first time.after this tragedy.

I would have loved watching the opening ceremonies for the 2012 Summer Olympic Games, it is always exciting. This year I won’t be watching.

Every host country does its very best to put on an amazing presentation to wow the crowd and dazzle the fans back home watching on TV. But when the United States athletes come marching out this time, it will be disappointing.

It is not be the athletes themselves, I will be rooting for each and everyone of them to do well. It is what they will be wearing that has made me so dismayed.

Our United States athletes will be wearing specially made suits by Ralph Lauren. Certainly a great choice right? Wrong, very wrong. The uniforms designed by Ralph Lauren, one of our greatest clothing designers, were made in China. 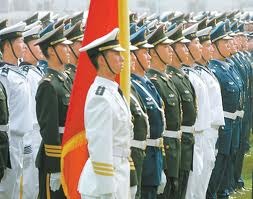 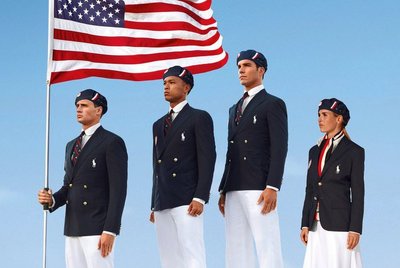 It has sparked quite a controversy and if I cannot do anything about it at least I can join a small but vocal group of disgruntled citizens by not watching the ceremony.

This is where we are now in America. The richest, most powerful country in the world can not even provide uniforms for their athletes on the global stage that are produced at home.

You would think even Ralph Lauren himself would have had second thoughts on that choice, after all he wasn’t trying to get the unit cost down to compete at Macy’s.

Maybe our athletes could join my protest and wear simple USA track outfits…if they can even find a setr NOT made in China?

I sure hope the next company that volunteers to make the U.S. uniforms learns from this. Hopefully Ralph Lauren does not get another chance to produce uniforms for our athletes again.

The Chinese at least certainly have a great deal of experience making uniforms though, especially those berets like the ones pictured below. 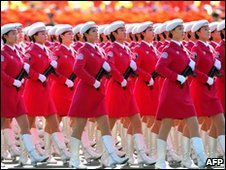