Ears still ringing from the 1960s? Jim Marshall might be to blame.

Marshall was the man behind “The” amplifier, the weapon of choice for guitarists like Jimi Hendrix, Pete Townshend of The Who, and Eric Clapton — “The Marshall.”

The sixties superstars’ ear-shattering sounds, blasting first in small clubs and music halls and later in stadiums and arenas, relied on the basic Marshall amp for their frenzied, thunderous roar. 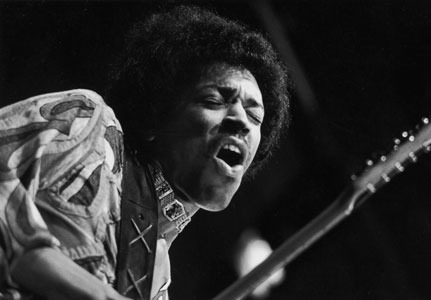 That was no accident. Marshall, who died Thursday at the age of 88, was not looking for precision when he and his sound engineers came up with the early Marshall amps in 1960. He said in a 2000 interview that what he wanted was raw, fuzzy power.

He said the rival Fender amp, tremendously popular at the time, produced an extremely clean sound that worked well with jazz and country and western but did not satisfy younger players searching for something different. He was looking for a rougher sound.

Marshall was a larger than life figure with a taste for single malt Scotch whiskey and Cuban Montecristo cigars. Even in his 70s, when he was already suffering from some serious health problems, he thought nothing of hopping a plane to catch an Iron Maiden concert.

His son Terry Marshall said Friday hours after his father’s death that his dad had liked being known as “the father of loud.”

Marshall’s death was announced on the company website with a statement honoring “the joy” his amplifiers brought to millions of music fans and vowed that the “world-famous, omnipresent script logo that proudly bears your name will always live on.” 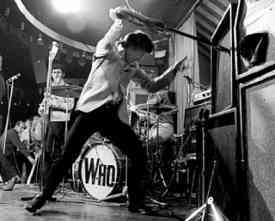 The familiar amps bearing his name can be seen in thousands of rock ‘n’ roll performance photos dating back to the era when Townshend and the Who would smash their Marshall amps at the conclusion of their stage shows–Marshall said in 2000 that Townshend had actually been careful not to destroy the expensive speakers, damaging only the cloth exterior, which was easy (and cheap) to repair.

Terry Marshall said the first amp was produced in 1960, a few years before the musical explosion that would give guitar-oriented rock its place in music history.

The first Marshall amps didn’t look like much — just a simple black box with a speaker inside and basic controls on top — but they packed a formidable punch. Aficionados credit him with developing the “amp stack” that allowed garage bands to make a powerful noise in small dance halls and gymnasiums.

Jim Marshall turned his amplifiers into a successful business, keeping much of his production in England. The company is based in a small factory near Milton Keynes north of London. 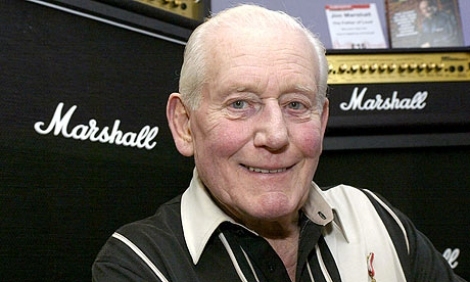 Marshall was proud that he resisted suggestions that he shift all production outside of England to save costs.

In his later years, Marshall became involved with numerous charities and in 2003 was made an Officer of the Order of the British Empire by Queen Elizabeth II for his successful export of British-made goods and his various charitable deeds. 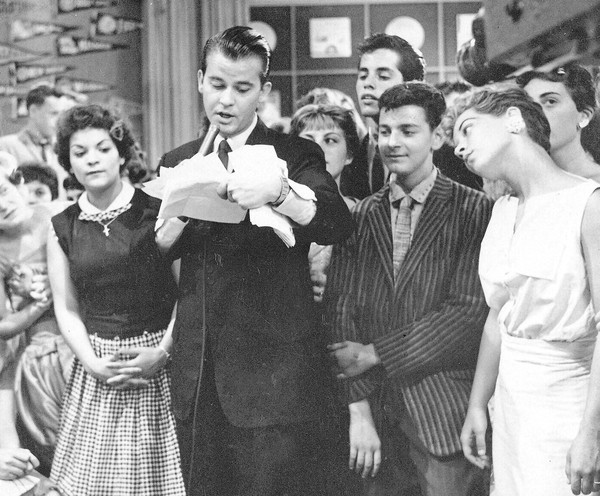 Dick Clark, the youthful-looking television personality who literally introduced rock n’ roll to the nation on “American Bandstand” and for four decades was the first and last voice many Americans heard each year with his New Year’s Eve countdowns, died Wednesday.

With the exception of Elvis, Clark was considered by many to be the person most responsible for the bonfire spread of rock ‘n’ roll across the country in the late 1950s. “Bandstand” gave fans a way to hear and see rock’s emerging idols in a way that radio and magazines could not. It made Clark a household name and gave him the foundation for a shrewdly pursued broadcasting career that made him wealthy, powerful and present in American television for half a century.

Nicknamed “America’s oldest teenager” for his fresh-scrubbed look, Clark and “American Bandstand” not only gave young fans what they wanted, it gave their parents a measure of assurance that this new music craze was not as scruffy or as scary as they feared. Buttoned-down and always upbeat, polite and polished, Clark came across more like an articulate graduate student than a carnival barker. 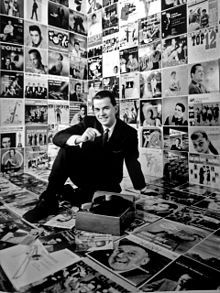 He helped transform rock ‘n’ roll into a cultural force, and in the beginning he did it by introducing artists such as Chuck Berry, Bill Haley and the Comets, James Brown, Buddy Holly and the Everly Brothers for the first time. All made their national television debuts on “Bandstand.”

As the music matured through the years, Clark played a potent role in star-shaping, and the Mamas and the Papas and Madonna would join the long and eclectic list of performers who got that first big boost on “Bandstand.” Clark himself joined many of his show’s guests in 1993 when he was inducted into the Rock and Roll Hall of Fame.

On Aug. 5, 1957, from the no-frills Studio B of WFIL-TV on Market Street in Philadelphia, Clark greeted a national television audience for the first time with the backdrop of a faux record store, a concrete floor and crowd of giddy teens in clean-cut mode: Ties for boys, no slacks for girls and no gum chewing were the rules from the first day. By the end of 1958, it was a full-fledged sensation with 40 million viewers tuning in to ABC to learn about the newest dance step, rock star or fashion style.

The first record on the premiere show was the then-shocking single “Whole Lotta Shakin’ Going On” by the ribald Jerry Lee Lewis. The juxtaposition of bracing music such as that with the show’s tame trappings — party games, a roll call of giggling kids, viewer voting on the best couple — would do more to put the emerging music into the mainstream than any other forum of the day.

While Clark embodied a “safe” aura on camera, off camera he was the prototype for the fledgling music scene’s new-model impresario. There would be close to three dozen songs played on the show on any given day and Clark huddled constantly with record executives and his own staff to decide which tunes got the highly coveted airtime. For the fans watching at home, Clark was simply the chaperon on their first date with rock ‘n’ roll.

“It’s got a great beat and you can dance to it,” or some permutation of that phrase, became the mantra of fan life during the “Bandstand” tradition of rating records. Three records would be played and members of the show’s dancing brigade would give them a numeric grade anywhere between the odd parameters of 35 and 98. Clark would announce the average, and fame and fortunes could be decided with that calculation.

That staple feature, along with the lip-syncing appearances by new stars and the countdown of the day’s hits made the show the template for the entire new television sector of music shows. “Soul Train,” “Solid Gold,” “America’s Top 10” and MTV’s “Total Request Live” were among the shows that would borrow from the formula. To artists, especially in the show’s first decade, a booking on “Bandstand” was a stamp of career arrival. 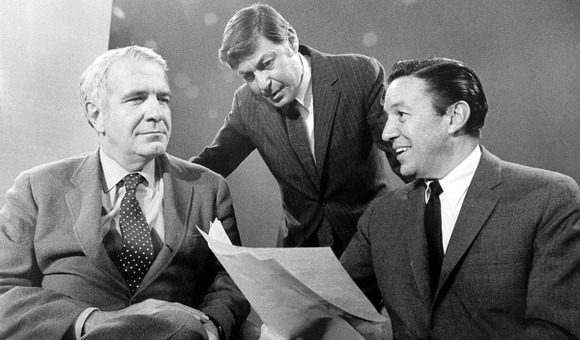 CBS a lauded Wallace’s brazen brand of reporting, which ”made his name synonymous with the tough interview, a style he practically invented for television more than half a century ago.”

More than any other broadcast network, CBS has been most closely associated with its broadcast news team, which over the years has boasted such heavyweights as Edward R. Murrow and Walter Cronkite as well as Wallace. Each of the newsmen helped define CBS as a beacon for serious journalism.

“All of us at CBS News and particularly at ’60 Minutes’ owe so much to Mike,” Jeff Fager, chairman of CBS News and a longtime executive producer of “60 Minutes,” said in a statement. ”Without him and his iconic style, there probably wouldn’t be a ’60 Minutes.’ There simply hasn’t been another broadcast journalist with that much talent. It almost didn’t matter what stories he was covering, you just wanted to hear what he would ask next.”

Wallace’s tenacious spirit and blistering questions helped to build “60 Minutes” into a ratings juggernaut, and establish the program as the gold standard for broadcast journalism. ”60 Minutes” has logged an unprecedented 23 seasons in Nielsen’s annual ranking of 10 most popular programs.

The durability of “60 Minutes” proves that viewers continue to have an appetite for hard-hitting newscasts. The program still thrives in an era when the format that inspired it — the once-a-week newsmagazine – has lost relevance with the immediacy of the Internet.

“Wallace’s relentless questioning of his subjects proved to be a compelling alternative to the polite chit-chat practiced by early television hosts,” CBS said in its statement.

Wallace’s last appearance on television was in January 2008. His sit-down interview on “60 Minutes” with baseball pitching legend Roger Clemens, who stood accused of using steroids, made front-page news.  It was a fitting finale that served to underscore Wallace’s legacy. 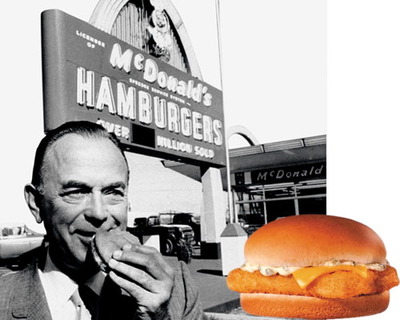 After eating my Good Friday dinner at the local Red Lobster I once again spoke with friends and family about the origin of Catholics eating fish on Friday. I immediately went to the web of course to look for the origin of our custom but found this story about Fish on Fridays, McDonald’s and Catholics instead.

 In 1962, Lou Groen was desperate to save his floundering hamburger restaurant, the first McDonald’s in the Cincinnati area.

His problem: His clientele was heavily Roman Catholic. In those days, most Catholics abstained from meat every Friday, as well as during Lent, the 40-day period of repentance that begins this week with Ash Wednesday.

His solution: He created the Filet-O-Fish — a sandwich that saved his restaurant and eventually would be consumed at a rate of 300 million a year.

“Frisch’s (the local Big Boy chain) dominated the market, and they had a very good fish sandwich,” recalled Groen, now 89.

“I was struggling. The crew was my wife, myself and a man named George. I did repairs, swept floors, you name it. “But that area (where his restaurant was located) was 87% Catholic. On Fridays we only took in about $75 a day,” said Groen, a Catholic himself. “All our customers were going to Frisch’s.

“So I invented my fish sandwich, developed a special batter, made the tartar sauce and took it to headquarters.” That led to a wager between Groen and McDonald’s chief Ray Kroc, who had his own meatless idea.

“He called his sandwich the Hula Burger,” Groen said. “It was a cold bun and a slice of pineapple and that was it. “Ray said to me, ‘Well, Lou, I’m going to put your fish sandwich on (a menu) for a Friday. But I’m going to put my special sandwich on, too. Whichever sells the most, that’s the one we’ll go with.’

“Friday came and the word came out. I won hands down. I sold 350 fish sandwiches that day. Ray never did tell me how his sandwich did.” But the chain made Groen modify the fish recipe.

“I wanted halibut originally,” Groen said. “I was paying $2 a pound for halibut. That sandwich cost me 30 cents apiece to make. They told me it had to sell for 25 cents. I had to fall back on Atlantic cod, a whitefish, and I added a slice of cheese. But my halibut sandwich far outshines that one.”

Groen wasn’t complaining. “My fish sandwich was the first addition ever to McDonald’s original menu,” he said. “It saved my franchise.”

And fed it. By the time he sold his franchise in 1986, Groen owned 43 McDonald’s restaurants in Greater Cincinnati and Northern Kentucky, about half the number in the region today.