Remember phone booths? Not pay phones, but the actual booths you got into in order to access that phone. Well there are only four left in all of Manhattan! Hey who needs privacy anymore? Maybe Clark Kent? 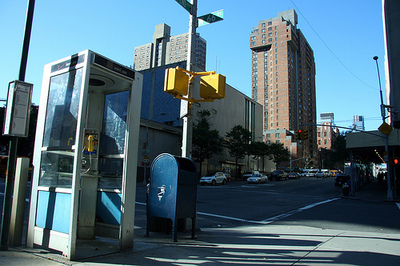 When movie companies film now they often have to recreate their phone booth scenes with props.

The cell phone used to be a luxury now it is now something that you can’t leave your home without and the proof is the disappearance of the pay phone. ATT has even reported a 20% drop in home phones. Why have a phone at home when you can bring your “home phone” with you?

In Japan even the office phones are “mobile”…each employee has a “PHS” phone that is linked to his or her extension so that when they leave their desk for any reason they can be reached.

In China very few people have so called fixed lines…the phone companies are years away form connecting everyone anyway so with wireless why even try?

New stats show China now has more mobile phones than it has landlines. According to the data from the Ministry of Information Industry subscriber numbers were up by more than 36% in 2008 to 290 million.

If you want to see a rare booth the remaining ones are at 101st, 100th, 90th and 66th streets in Manhattan. Better visit them now, soon they will only be in museums.