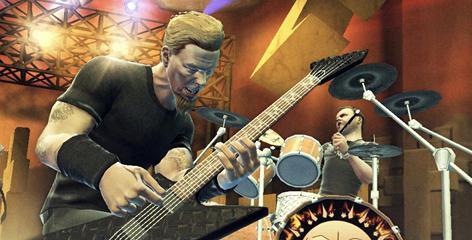 In the three years since Guitar Hero stole the video game stage, fast-fingered consumers have bought more than 22 million units. Now, Activision and developer Neversoft are looking to kick the franchise up a notch with Guitar Hero: Metallica, launched this spring 2009.

Designed to challenge hard-core players, the game “is a lot harder, especially on drums. Well, it’s a lot harder all around, to tell the truth,” says lead designer Alan Flores. “Most of the songs have a higher level of difficulty, certainly at the end of the game when you are playing the old-school Metallica stuff where you play really, really fast and there’s lot of double bass (drum) playing, fast guitar playing and crazy leads.

The time is right for a Metallica game.

The band is back atop the heavy metal world. Its latest album, Death Magnetic, has gone platinum after premiering at No. 1 on Billboard’s Top 200 chart — its fifth consecutive album to do so.